This was energy-work we did on the Aran islands, off the west coast of Ireland in 2007. I am clairvoyant and clairsentient so when I say I ‘hear’ or ‘see’ things it means that I can see and hear with my inner senses. When I work in this way everything is felt and seen as though it exists in a parallel dimension, or maybe in multiple dimensions. They are images held in the collective unconscious as archetypal energies.  This is how I perceive this other reality, as it is a mythical reality and can appear from any culture or tradition. The trick is to learn to ‘read’ the information presented to me, although sometimes I only understand what it means years after the event.

Working at sacred sites in this way is about changing the energetic matrix of that site, or up-grading it so that it can continue to function in the way it was designed to function when it was first established. Old ‘programs’ need to be removed or installed so that they continue to effect the the collective unconscious of the surrounding countryside and everyone who lives within its energetic ‘field’. This upgrading effectively allows new ideas to be born thereby changing the nature of the human landscape and its belief systems. Because my work is about Balance this brings changes relating to how people live on the planet and how they live their daily lives. It makes people more aware of their relationship to the earth on which they live so that they live in balance.

In much the same way as healers work with the energy points and channels within the human body I do the same with the energy flows and points on the Planet. This is work that has been done for thousands of years by journeymen priests and priestesses, and we are just relearning and carrying on the tradition!

We arrived in Aran on the 8th  of June and having left our bags at the Kileany Hostel, where we were staying, we went for a walk to St. Benan’s church on the top of the hill behind the hostel.  Below it there is the remains of a Celtic cross and the outline of a church dedicated to St. Enda. In between the two stood the remains of a round tower. The church was tiny and I immediately felt the need to raise my arms to the sky, a sign that means the need to bring down energy.

Almost immediately an old bearded man appeared, dressed in a long grey, hand-woven robe. In his hand he held a wooden staff which he handed to me. I called up to the sun, energetically reaching up to it to draw its energy down to the earth and found myself reciting a prayer of sorts. I asked that this solar energy permeate the rocks and soil and water of this island, asking that it infuse the land with solar light. This went on for a few minutes and I saw the island being ‘charged’ with this light, bringing life to it and fertility. I realised that this is what these early monks had done and why they had built their little churches and settlements on these barren places. Someone had to be the channel for solar light and be the harmoniser of the area!

I was told then to ‘unlock the codes and I saw my energy open up and spin, anti-clockwise into a large disc. I saw a large key being turned in a lock. It opened a tiny cupboard in the wall of the church, like a tabernacle and inside of it was a large emerald. A Persian-looking man, holding a curved scimitar, cut a cross with it, in the palm of my right hand and placed the emerald deep into the cut. He then healed it up with the tip of the sword so that the emerald was underneath the flesh.

I had to then cap the swirling energies and a priest appeared carrying the solar disc ornament of the church, the monstrance. He told me to proceed to the seven churches and he walked out the door in front of me. Before I left I was handed a large salmon.

On our cycle we made impromptu changes as we found little churches on the way. The church of St. Ciaranwas interesting as the main energy vortex was not in the main building but one alongside it. We stood in the building and brought the energy in. I saw a five diamond design which meant that the site worked on five levels of energy, the central diamond being the largest and first energy level. The marker stones were telling us about the energy of the site and how it was connected in layers. It is believed that it is just art! We find this a lot at sites. the codes are placed on stone markers so if you know how to read them you know what energies are anchored here by the previous earth workers.

On we rode, the weather getting hotter and hotter and we stopped at the seal colony but couldn’t see anything. We kept going until we got to the seven churches. Again there was very little in the main church so I went to ones I felt drawn to. In the other oldest church I was given a white and gold sword and I brought the solar light in. I could see the priest carrying the monstrance. We went into each church in turn, anti-clockwise as it turned out! In the third one I saw myself putting the sword I had received in the first one into the ground. Then I saw myself as a monk ‘digging’ the sword deep into the ground like pushing a spade into the ground with my feet. I kept pushing it in deeper and deeper until it was completely in the ground and the tip of it touched an underground stream. As the tip of the sword pierced the water it gushed up and past the sword pouring onto the ground of the church and filling it up. It was a spring of the goddess!

I continued into each church and something different happened in each one. In the second to last one I laid some blue cloth in its interior like at Tintern inWales, but this time it felt different. Then I returned to the biggest one and I saw the monstrance being placed on the altar so we could re-establish the energy.

We were pretty tired by then but we still had to go to Dun Aonghas. So off we cycled, leisurely!

We reached it quicker than we expected to! And we had an hour left in which to explore it! We had a quick cuppa and walked up the hill to the stone dun. It was amazing and scary. It is literally built on the edge of a very high cliff with nothing between you and the sea. I wasn’t sure what I was supposed to do here but this was one of the places I had to work on as per instructions! After spending some time there I went to the edge. I tuned in and found myself calling up the Lord of the sea, Poseidon. I called to him to rise out of the waters. It felt like I was raising the powers of Neptune! Next I called to the Queen of the Ocean to rise and then the sea peoples, mermaids and mermen. I called all the beings of the seas, and oceans to rise once again. It went on for about 20 mins, asking them to rise and be powerful again in order to help humanity. 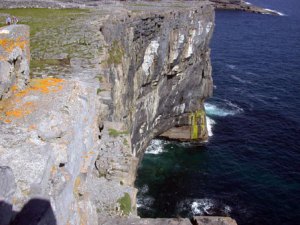 It definitely felt more like a sea temple than an iron Age community. although original was not built on the edge as it appears today. It was built further inland but erosion has caused much of it to fall into the sea.

While we were leaving I saw myself walking out of the fort as a young person who was in training as a water worker! I was dressed in a cream linen tunic and trousers and it was my job to work with the sea energies. It is a completely different way of working than working with the land energies and yet they have their counterparts. I loved it.

We were too tired then to go to the Serpent hole, as we had planned, so we decided to go another time, perhaps when we came back.

The following day we decided to take it easy but we ended up cycling down to St. Enda’s chapel. It has been practically buried by the sands over the years but they clear it out periodically. It’s in the middle of a graveyard too. While I stood inside I ended up doing an energy working. Initially I was picking up the energy of St. Enda himself and my guides told me what had happened  with him. He had started out with the right intention, following his guidance and setting up these monastic settlements but, over time, he got stuck in thinking that it was his martyrdom, his ‘duty’ to stay and work on the Island. His energy work was impeccable but his belief system eventually tampered with it because he was unable to just let go of his ‘babies’ and hand them over to someone else who was just as capable. Because it was his job to ‘plant the seeds’ of the new belief system his own lack of movement forward and his belief that he was a martyr, having to take responsibility for it all and that no-one else could do it meant that those were the beliefs he planted. This then contributed to the over–all belief system of the early Christians! We can all see how that worked out! There seemed to be a lesson here for us too not to get too attached to the centres we establish but to hand them over in trust to someone else.

So, having received that information, (from the instructions I had received earlier in the day from my guides: Then there was a bishop but he was a skeleton, and he was still giving blessings.) I was told that I needed to undo these beliefs and plant the new seeds of this time. I tuned in and really felt the negative beliefs which Enda had planted so that they could be removed. Initially I wasn’t sure how to remove them when suddenly an extremely fast vortex opened up and sucked them in to the earth with a huge ‘whoosh’. It happened so fast. Then I had to plant the new seeds which was the easy bit.

When I had finished and opened my eyes my colleague Chris said that he had nearly fallen over suddenly when a vortex suddenly opened and pulled him off balance! It’s great when he doesn’t know what I’m doing but feels it anyway! Its always such good confirmation. I just stand and do it all in my head and see it around me so no-one ever knows what or even if I am doing something, I could just be meditating for all they know.

There was a lot more to do here as we were to discover over the coming year and I made some very interesting discoveries. there is always something to learn doing this work. its why I love it so much!!!! 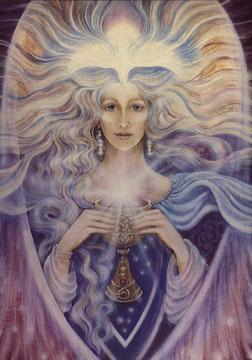